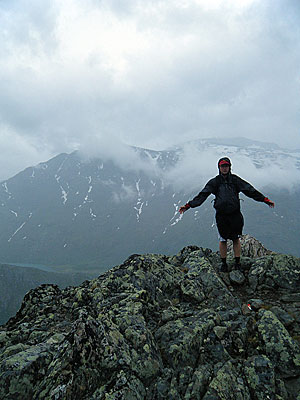 "One of the key aspects of Norwegian society is what they refer to as 'nearness to nature,'" says Robert Zimmerman, who spent the summer of 2010 studying abroad in Oslo. "It means that Norwegians believe that they have an obligation to spend time in nature. This is a value instilled in them from a very young age through frequent field trips to the vast Norwegian countryside. In fact, if the weather is nice out it is not uncommon for class to get out early and people to leave their offices in favor of spending time outdoors. Norwegians take great pride in the vast fjords and great mountains that cover their country."

Robert is pictured here on a 10-kilometer hike over the fjord Besseggen, Norway's most popular hiking destination, which receives an average of 50,000 visitors each year.

While in Oslo, Robert also conducted research for his final project, a comparison of the Norwegian and Swedish welfare systems. "The welfare state is at the core of Scandinavian society," he says. "I believe studying the differences between these two countries caused by the significant difference in the availability of natural resources can point at some of the weaknesses of the system and how they can be countered successfully."